Note: There is a follow-up post that deals with the Yelp review and the aftermath running into August 2010.  I felt it important to add lessons learned to the issue. Please do not leave comments or advice  for Amy. She doesn’t read the blog. the times I have been there, the food was good and I got excellent service. But I was also told that Amy does all the cooking and baking, and that was not true. And food servers not getting the tips? Inexcusable.

* * * * *
Amy’s Baking Company is SO much more than a bakery. We went for dinner last night and both of us had the best meal we’ve had in a long time. Maybe even since we moved to Phoenix. Owners, Samy and Amy Bouzaglo, are on site all the time. Amy is in the kitchen preparing organic salads and fresh bread, Samy is out front, spoiling customers.

The bistro is wonderful—-sparkling black-and-white tiles, black granite tabletops, black beaded crystal chandeliers, Venetian plaster walls and gilt mirrors welcome you to a European-style Patisserie (or Conditorei if you are German). You walk past a glowing pastry case where toffee cheesecake, ginger cupcakes and flourless chocolate cake are heaped with exquisite caps of perfectly piped whipped cream. You brain immediately makes room for dessert, but you walk past and sit on a black-upholstered chair and start to look at the menu. 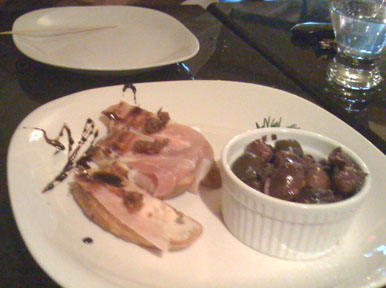 We had the A.B.C. House-Made Marinated Olives ($3)  The portion was generous, and the marinade incredible—-sage, peppercorns, rosemary, fennel seeds and other savory delights. The olives are neither slippery nor over-vinegared. Calamata and red olives are perfectly spicy and salty, like a good olive should be.

We also shared a plate of three crostini–crisp, tooth-friendly bread with prosciutto and a dab of fig jam. Perfect. We splurged on drinks–a dirty martini for him ($6) and a prickly pear margarita for me. ($4) Both yummy. My margarita was dipped in sugar instead of salt, which was just right for the citrusy cactus juice mix.

so we could soak up the cream sauce. OK, so this is not the dish to order when you are on a diet, in case you were wondering. The ravioli were toothy, generous, and the filling so good we goth groaned with delight. The bread, cut in wedges and looking like an untopped pizza, was perfect for soaking up the sauce. Not a hint of grease–you’ve eaten sauces 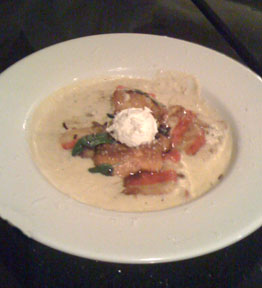 that leave an oil slick on your palate and have you licking the roof of your mouth like a dog dealing with a spoonful of peanut butter.  Not this sauce. Napped onto the plate like a bolt of heavy silk, the sauce was a creamy blend of herbs and richness that supported the butternut-squash stuffed ravioli.

On my plate, three very large shrimp, perfectly cooked, were wearing coats of crisp coconut. Exactly how the chef managed to get the coconut golden and the shrimp not overcooked is beyond me, but that’s what it was. Perfect. The shrimp were in a mixed field green salad of perfect proportion, lightly dressed with care not to over-vinegar it. (A problem with most mass-market restaurants–too much vinegar, not enough emulsifying.) Topping the salad were toasted macadamia nuts and hot, fresh sauteed mango. When the waiter came to pick up the plates, only the tiniest shred of shrimp tails remained.

See that tiny dried rose to the right of the raspberry? It smelled like a rose. That’s attention to detail.

My brain reminded me that I’d passed that bakery case, so back we went. We chose a lemon tart and a flourless “chocolate pie” which was really a tart of chocolate with a chocolate crust. ($8 each, but one can easily be dessert for two or three). The topping was a mix of whipped cream and mascarpone–a rich, spreadable Italian cream that is often called cheese. Well, it is, but not what we Americans think of as cheese. Neither tangy nor salty, and with the consistency of pudding, mascarpone is a promise of heaven. It can be used either savory or sweet, and on these tarts, it was mixed with whipped cream to lighten in and vaguely sweetened. One of the signs of a chef who knows what he or she is doing is a light touch with sugar in whipped cream. Sweetness should be scarcely noticeable, and here it was, allowing the other flavors to bloom. We had the desserts with French press coffee–fresh, blooming with flavor and perfect with the rich desert.

This delightful evening, complete with drinks, appetizer, main course, dessert and coffee came to $70 without tip. It was the best $70 I’ve spent since I found the Mephisto sandals on sale.

When we left, we knew we would be back–soon. Amy’s Baking Company is conveniently located on Shea, close to old-town Scottsdale, around 74th St. Worth a trip from anywhere–including Ohio.

—Quinn McDonald is a writer, foodie and life- and creativity coach who dined and went to heaven in Scottsdale last night.