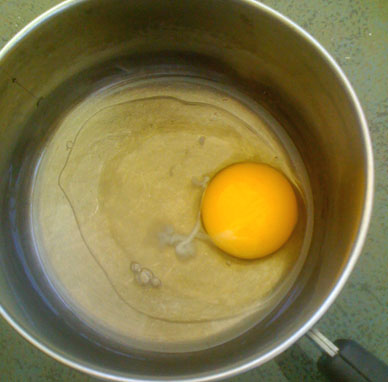 Every year, in July, I try to fry an egg. (See last year’s report.) Not on the sidewalk, that’s a liability and too messy, not to mention the smell or clean-up.   I use a pot, grease it, crack in an egg, cover the pot and put it outside.

By “frying an egg” I don’t mean over-easy with crispy brown edges. It’s hot here in Arizona, but even at 114 degrees F, it’s not a stovetop. You have to be patient, and give it a little time. I cover the pot to keep out flies, ants, curious cats, javelinas and coyotes. It helps keep the heat in the pot as well. 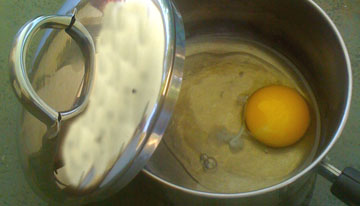 That lid keeps an amazing array of creatures out of the pot.

Today, I put the egg pot out just before noon and retrieved it six hours later. We are in typical July weather–it was 99 at 6 a.m., over a hundred by 10 a.m., and reached 114 degrees by 3 and stayed there till about 5 p.m. As I write this at 9:30 at night, it is 108 outside. The pool water is at 100 degrees, it feels warm when you get in. (Not to worry, you get out and the water evaporates so fast, your teeth chatter. Then you get back into the warm pool.)

Here is the egg, as it spent most of the day–in a small, covered pot. 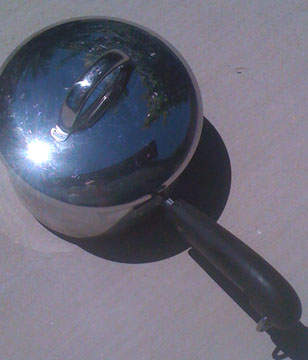 The sun was almost at high noon when I started.

In the early afternoon, I peeked in, and found it starting to cook. 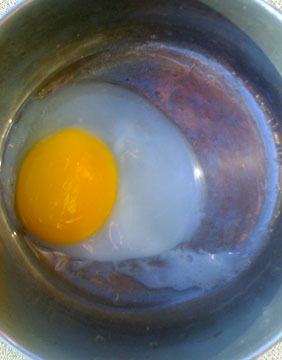 In the later afternoon, the white was set, and the yolk was soft, but set at the edges. More than coddled, less than poached. And no, I did not eat it. It’s an experiment, and I think it wise not to eat eggs that have been in the sun for hours.

All done--not hard-boiled, but a long way from raw.

All done for another year. Maybe next year, it’s time for a new experiment. What would you like to know about the limits of heat in Arizona?

—Quinn McDonald is curious about the world around her–from eggs to acacia trees that drop green pods that dry out and pop open in the rain.  She keeps a nature journal and is writing a book for people who want to keep an art journal but can’t draw.