Yesterday I reviewed the Sakura Moonlight and Glaze pens. Sakura also makes Micron pens, and if you use those, you should know one big difference between Microns and Sakura gel pens–glaze, color, sparkle–all of them. Microns zip along, the faster you draw, the faster they put down color. Gel pens work best if you slow down just a bit. A slower, careful motion creates a smooth, constant line.

For a great Glaze Pen image on a transparency, outline with a dark color, fill in with a bright. Transparency film photographed on lavender paper.

Bonus tip: Store your gel pens point down, to keep the ink close to the tip. And keep the cap tightly in place so the ink doesn’t dry out. Those two tips will make a big difference.

The Gelly Roll Stardust ink is very fine pale gold glitter in a clear gel. Calling it pale gold is a judgment call. It could have as easily been called silver, except it’s really neither. Warmer than silver, cooler than gold, the color is really stardust. The line is fine, and, if pulled slowly and steadily, is wonderfully consistent. On white paper, it looks as faint as a snail trail, on black or other colored paper, the sparkle really shows up. Unfortunately, a scanner doesn’t cause colors to pop, so expect much more than in the sample below, which I made for general comparison. 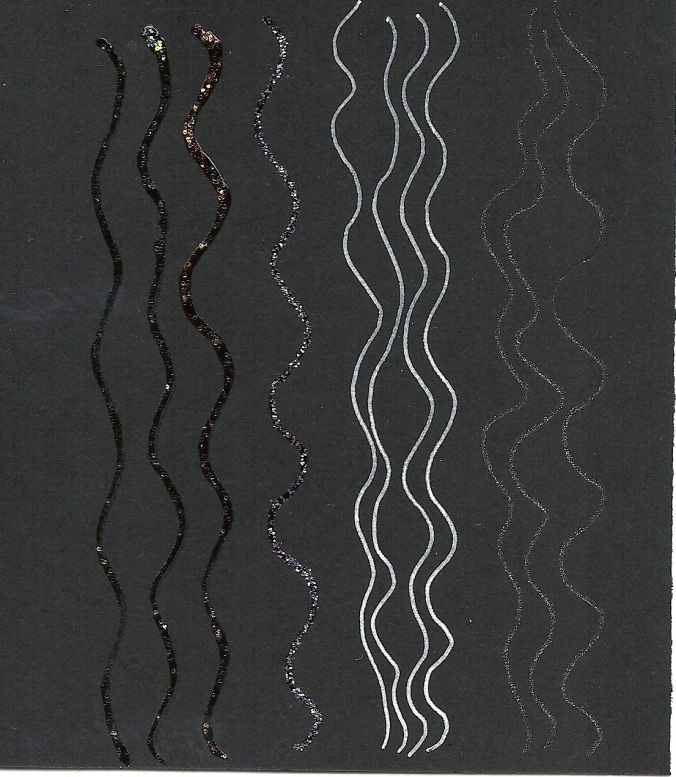 Comparisons of various glitter and glue pens. See below for details.

The black paper sample, above, shows a variety of glue pens. Left to right:
The first three lines on the left are made with Crayola glue pens, applied by squeezing a line of glitter-filled glue. The colors, left to right are red, green and yellow. If you tilt the paper, you get more color sparkle.

The fourth line from the left is Sakura Quickie Glue Pen dusted with extra-fine Martha Stewart glitter. The glitter is consistent and dense, with no glue visible. The glue pen is permanent if used when glue is wet and re-positionable when the glue is dry. It’s a great pen and my favorite for all its applications. (More at end of article.)

The last four lines (on the right) are made with the Sakura Stardust Pen. Far more sparkle than shown. The line furthest to the right was drawn very fast and you can see an area where there is little sparkle. Slow down and you’ll get the best results. Sakura warns that some sparkle may be lost with repeated hard use, so add a top coat of varnish if the piece is going to be rubbed or scuffed. 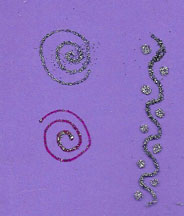 I tried the glue pen with two colors of Martha Stewart extra fine glitter in Hematite and Sapphire. Be very careful with the glitter. It spreads quickly and easily–the tapping you use with regular glitter will scatter this all over your studio. I discovered working with a damp brush and damp paper towels controls glitter getaway.

The glue pen works on transparency plastic (left) as well. You can see the consistent, even application on the shapes made with glue pens.

The Gelly Roll White pen is great for lettering on dark paper, true, but it also works for lettering over dark acrylic paint. What doesn’t work well is to use the white pen as a resist.

Below is an example of resists. On the left, I used a Sakura clear pen (one of the Glaze series). You can see how well it works as a resist. Even with a lot of color put down with a scrub brush (you can see the blue dots), the resist stayed.

Watercolor over clear, on left. Sparkle and white pens under watercolor on right.

Personally, I am in love with the glue pen. It lays down a fine, flat bead of light blue glue, so you can see the line. I use a figure frequently in my artwork–its a slim wavy line that I use in two and 3-D.

In the example above, I cut out the waves in pale lavender, lavender, and black. The usual way to put the waves down is to coat them with glue on one side, then very carefully lift them and place them. Glue usually get on my fingers and on some of the waves, creating placement havoc. With the glue pen, a simple wavy line work the first time. I drew a careful dot at the end of each wave. To glue down heavier pieces of paper, draw spirals in several places.

I outlines some of these waves in Starlight or White pen, and am happy with the results.

Quinn McDonald is an author, artist and certified creativity coach who helps people through changes in their hearts and lives.