I was originally going to call this post “size matters,” but I knew that shooting to the top of Google with all the wrong readers was not my goal.

Handbook journals. I have the green one, center. Available at Daniel Smith.

The last time I chose a new journal, I chose a 5-1/2-inch square one, made by Handbook, and available at art supply stores. I got mine at Daniel Smith. I like the journals; their paper is vanilla colored and smooth, with enough tooth to hold watercolor pencil and heavy enough to take some wet media, as long as you aren’t doing a lot of watercolor.

I deliberately chose the square one, thinking it would fit in my bag more easily. The idea of using a square sheet seemed interesting. I could create short entries. But now, about half way through, I am over it. I hate the constriction of the 5-1/2 inches. I keep fighting the page, dragging the layout across the gutter to create long pages. But then they seem disproportionate and I’m not happy. 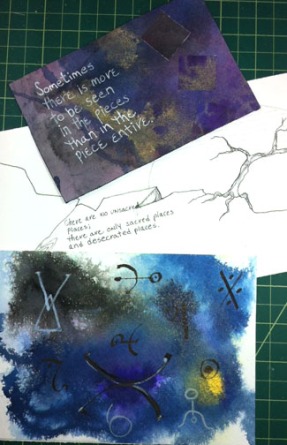 One side of three loose pages for the binder.

I like to work at about 5 x 8, sometimes thinner and longer, sometimes a bit wider, but not square. I’m working on a series of double-sided loose sheets, and I am suddenly completely delighted with loose pages. I have a reclaimed 3-ring binder, a new cardboard 3-ring binder, and I want to make sheets of different sizes because I like the rustic, found-treasure look.

I don’t know where this whim came from, but I know enough to follow it until I learn something from it.

I’m experimenting with ways to put writing on the back so the writing is as satisfying as the design on the other side. I began with a postcard look and decided that I liked it, but it was not enough. So I move on.

Update on the Facebook/Twitter self-editing: On January 8, I challenged myself to use Social Media differently. I tried to post only those comments which directly acknowledged the poster’s ideas or questions. No telling my story, hijacking the thread, or giving advice. Harder than I thought. I spent a lot less time on FB, though, which may be a good idea. I failed miserably twice, both times when the poster asked for advice. Instead of saying something complimentary, I stepped in with an opinion, backed up by my marketing background. No more of that. There isn’t enough room to explain the reasoning behind the opinion, and most likely the poster wants reassurance. Lesson learned.

—Quinn McDonald is back to exploring the limits of collage and two-sided art pages.