Note: DJ Huff is the winner of the October 31 Featuring: magazine giveaway–Congratulations, DJ!

We live in a world of “them” and “us.” The labels shift, but the “us” is always people like us, and the “them” is always someone we push down so they are “less.” Once we have a group of people we can scorn, they become “those people.” 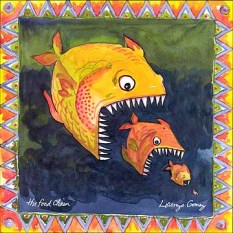 Big fleas have little fleas upon their back to bite ’em
And little fleas have lesser fleas, and so, ad infinitum.
–the original idea was Johnathan Swift’s
The image is from http://poster.4teachers.org/

In Middle School, if you weren’t one of the cool kids, you were one of  “those people.”  Seventh and eighth grade were the years we decided what we would do to be popular–gossip, lie, cut down–or how we defined loyalty–sticking up for our unpopular friends, refusing to write in slam books, staying true to your own values.

If you were a hard science major in college, humanities majors were “those people.” At your first job you might have been one of “those people” when you were a new hire. Maybe you developed a skill to stand out and separate yourself from the other outcasts. Maybe you even created a few new outcasts so you could create a distance.

And here you are today, well aware who “those people” are in your life. Possible candidates for “those people” are people who make less money than you do, who drive a car older than yours, who are fat, disabled, or unfashionable. If you add people not of your religion, of a different color, and those who vote for the other party, you have a deep group of personal outcasts. It probably makes you feel better to know you have someone you can wrinkle your nose at in displeasure.

Our social fabric is a big food chain. And you aren’t at the top of it. You, too, are someone’s “those people” and there will be people who distance themselves from you for reasons that hurt, or at least sting.

One way to stop the chain is to make sure that you hold the door open for the person behind you. Literally, yes, but metaphorically, too. Had a boss that treated you badly and finally broke away? Hold the door open and be a boss who is a mentor, not a terror. Had a boss who belittled you when you had to  take time off when your mother was sick? Be kind to the co-worker (or direct report) who works for you and has family issues.

How you behave is shaped by how you were treated, but you don’t have to recreate your past. Not everyone will love you for who you are, but you can always act like you are proud of who you are. You know you are on the right track when you behave well toward those who have no power over you.

—Quinn McDonald lives in the social food chain. Sometimes she is chased by sharks, some days, she chases them.