We had just moved into our Phoenix house and I was busy re-potting plants that had been shipped in the moving van. Six days in the dark, in a closed in moving van in August, and I was delighted that all the plants had made it. 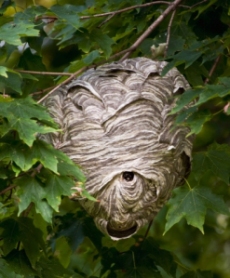 As I looked around the backyard, I was pleased to recognize a fig and two palo verdes, an orange and. . . another tree that hadn’t fared well lately. It was pretty tired looking. The trees hadn’t been watered in a while, so I set the hose to work, watering the parched ground while I re-potted the plants.

The pots were looking good when a wasp zipped by me, did a U-turn and flew by again. I’m allergic to wasps, but not scared of them. Where was my Epi-Pen? In the medicine cabinet already? In my purse? I didn’t remember. The wasp was gone, so I continued to work. Another wasp flew by, a bit closer.

Stepping back from the potting project I looked around the yard. There, in the tree that I didn’t know the name of, was a wasp nest. About as big as a large orange. Deciding it was time to move some of the re-potted plants indoors, I asked my husband to check out the wasp nest. Did he want to remove it, or was it time to call an exterminator?

He went out into the backyard while I located the Epi-Pen. He came in, smiling. “I know what kind of a tree that is,” he said.

“Really?” I asked. Of the two of us, he is far less likely to be the tree identifier. “What kind is it?” 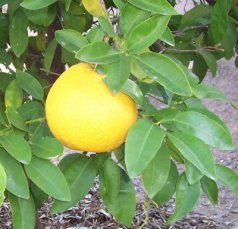 Grapefruit, ready to pick and eat. You can’t do that with a wasp nest.

I was stunned. I was positive I had seen a wasp nest. After all, the two wasps were flying around and. . . I went outside, certain he was wrong. I’d seen the nest. I know wasp nests. But when I looked, it was, indeed, a grapefruit.

The mistake was easy to understand–see the wasp, see the pale round thing, and decide it is a wasp nest. My certainty had been at 100 percent. And it had been 100 percent wrong. So positive it had been a wasp nest, I actually looked around for that nest. Nope, just a grapefruit.

It’s true so often. We see what we expect to see. We are certain what people will say to us, or how they will behave. We are sure when we have no idea at all. We assign people roles, we expect to be hurt, or disappointed. We do this all with great certainty, without knowing at all. After a while it becomes a habit. All in all, I’d rather be surrounded by grapefruits than wasp nests. And that’s what I’m going to expect to see on those trees.

—Quinn McDonald loves grapefruits. The ones on her trees will be ripe in mid-December. Meanwhile, she’s writing her book.