Every time you make a decision, you close the door to other choices. It’s a fact of life. If you are a perfectionist, this causes a problem. Did you make the best decision? If it is the best decision for now, how about tomorrow?

For those of us who are recovering perfectionists, I can cheerfully say, “Make a decision. Every one of them comes with a consequence. You can’t control your whole future. Risk!” 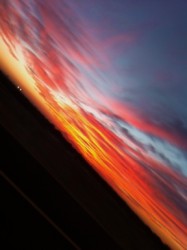 Perfectionists are excellent procrastinators. Putting off a decision means not making a wrong decision. Yes, that’s true, but it also means you are not moving forward. And not moving forward isn’t an act of perfection. The difference between a rut and a groove is the length of time you’ve spent there.

Here’s something I learned over the years: if you aren’t making mistakes, you aren’t taking enough of a creative risk. If you are doing everything right, you are doing the same thing over and over. That isn’t perfection, that’s the shortcut to insanity. Unless you are assembling a kit, perfection is not the goal.

Come on out in the open and try making a decision whose outcome isn’t practiced, isn’t certain. If you make a mistake, you’ve learned something. And learning something is a milestone to getting better. Perfection, on the other hand, is an impossible state that hates “better.” So it remains immobile.

Image: I took the photo without looking as I drove from Tucson to Phoenix. The phone slipped and I took the photo. A happy accident–I like it better than a planned photo.

—Quinn McDonald is spending the weekend taking risks with her new book. The Inner Critic is frantic and her Inner Heroes are gathering.