How did Saturday come around so fast again? It’s time to announce the winner for the Featuring magazine: Kristin Freeman is the winner–Congratulations and thanks for reading my blog!

San Francisco may be the City by the Bay, but it is also the city of almost daily fog. When I lived there, I rarely thought of the fog as romantic or beautiful. Simon Christen filmed the fog for two yeas, then edited the flowing, rolling, blowing clouds into a video. Jimmy LaValle composed the music, Adrift, for this piece.

The filming was done in seconds-long segments, and the result is the flowing, rolling ocean of fog enveloping the landscape and landmarks.

Stuart Haygarth is a lighting designer. He collects found objects and recycles them into functional objects–often lighting fixtures. He collects a lot of one object–eyeglass frames, bottles, and then uses one object type to create his work.

He uses only one type of object per sculpture. 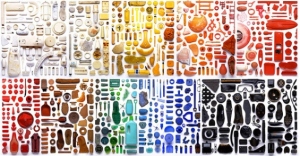 On the right is a collection of found objects, sorted by color.

And below  is a chandelier made entirely of eyeglass frames.  The chandelier is made from 1,000 pairs of eyeglasses. There is an interesting metaphor in using eyeglasses to create a light that illuminates the dark. 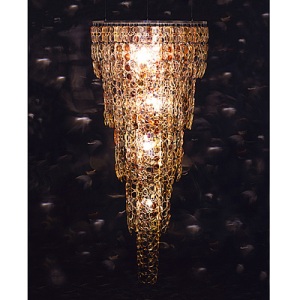 Chandelier made of spectacles by Stuart Haygarth.

Alana Dee Haynes has taken ordinary doodling into the art world. And she does it in the simplest way–she takes fashion magazines and doodles on the photographs, altering them substantially.

The next step was interesting–the magazines asked her to doodle on photographs they supplied. She creates beautiful and mysterious art that combines photography and simple repetitive artwork. She has a wide selection of work, from designed “gloves” to entire color collages on her tumblr site. 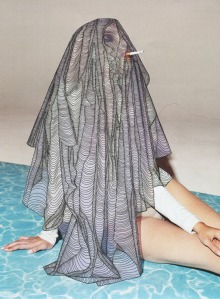 The obscuring veil is beautifully done, and the cigarette adds an odd juxtaposition of humor.

Have a wonderfully creative weekend, whatever you do.

–Quinn McDonald is spending her weekend proofing the galleys of her book. Nothing could be better in the heat than an excuse to be inside.

Quinn will be demonstrating Splash Inks at Arisona Art Supply in Phoenix this morning at 10 a.m. Her next class, on Monsoon Papers,  is also at Arizona Art Supply, on July 13. See the details and register on her site. Arizona Art Supply’s Phoenix store is on the Southeast corner of Indian School and 16th Street in Phoenix.