Being on the road is tough. Not whining, but opening the door of yet another anonymous hotel room, eating by yourself in another restaurant where the only thing on the menu that fits the diet and the budget is yet another Cesar Salad, and the reward after a day of teaching is driving two hours to the next venue–it makes you reach in deep and suck it up.

“Eating Bitter” is a Chinese expression of working hard for what you want, sucking it up and knowing that you chose this life and you are making meaning even if it is a lot more effort than you want.

One of the ways I get through the chore of eating bitter and find a bit of sweetness is creating routines–I make an effort to walk every morning, even if I am a thousand miles from home. When the world shrinks to classroom-restaurant-car, it’s important to have a camera. I photograph small moment that seem important and use them in my Commonplace Book. The photo is something that makes me smile, or that serves as a metaphor. I love doing this for many reasons–it connects me to a strange place and it is comforting to find some small shred of beauty in an everyday place.

From my most recent trip: photos and notes that I put in the Commonplace Book for further development. 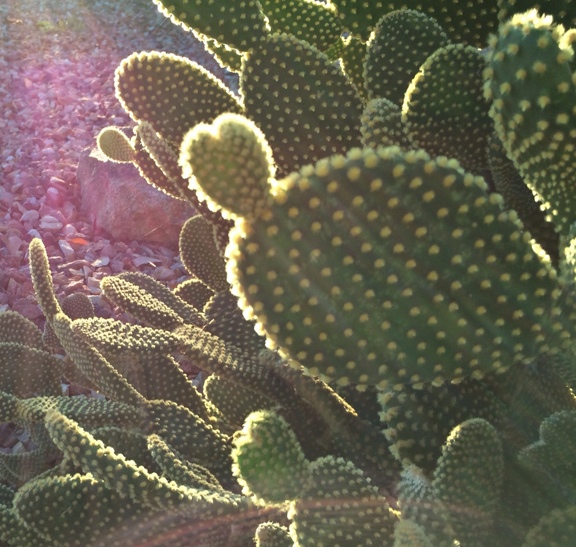 Heart on a cactus. Look at that backlighting! Thorns make a halo. Combination of thorns and love.  Being tough can still work as soft. Being uncommon can attract the right thoughts. 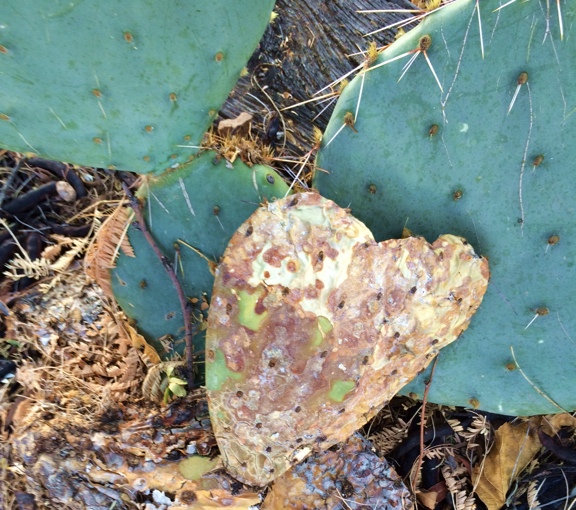 Damaged heart. Look at that texture! Damage is dramatic, but can be beautiful, if you look at it the right way. Even nature makes a collage of color and texture. A cactus will root months after the piece breaks off. Life after damage exists, can even thrive. 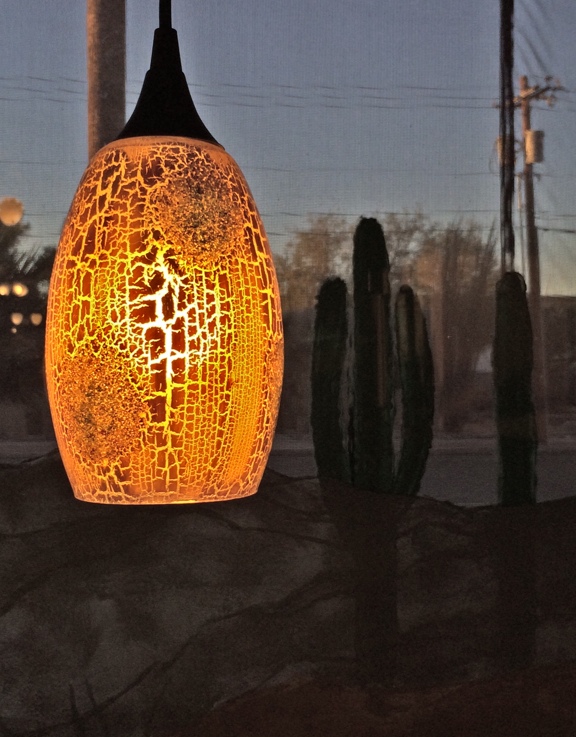 Love the texture on the mid-century lamp. It warms up the whole photo. The flatness of the photograph makes the cactus in the background look like it’s outside, but it is really painted on the window. Illusion of paint–make it work and you believe in it. 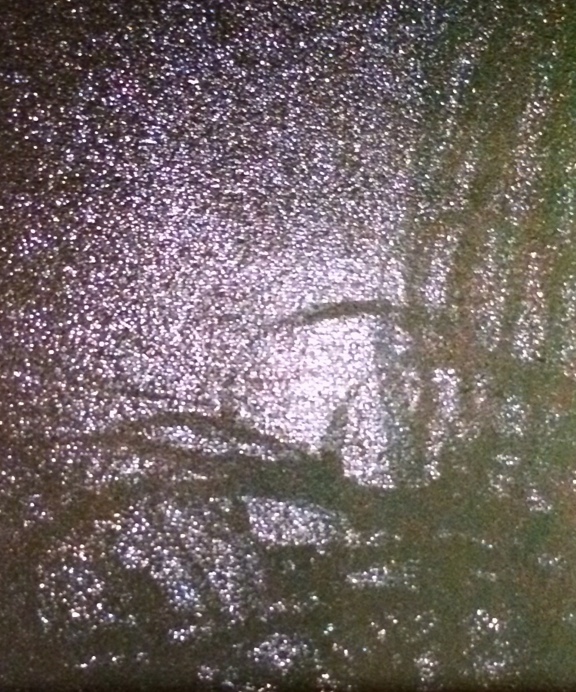 Even the very ordinary items in a hotel room can be given a new perspective. This is the bathroom window over the shower. The “grass” is a palm tree, and the light is from a passing car. The moment was fleeting, but perfect. Glad I was there to see it and catch it.

A lot of comfort on a trip is creating a piece of life that is comforting and interesting, no matter where you are.

–Quinn McDonald has made friends with the road.

But after two books, I want to go back to the Commonplace Journal because it is my idea book. It’s not to show around the table, it’s not a sketchbook, it’s a book that helps me capture who I am today so I can see where I’ve been and how far I’ve come. (Here’s a great post about Commonplace Journals from Kaisa Mäki-Petäjä, sketcher, naturalist and journaler.)

And here’s an example of an ancient one, because the Commonplace Book has a long history–going back to how guild apprentices learned their craft. 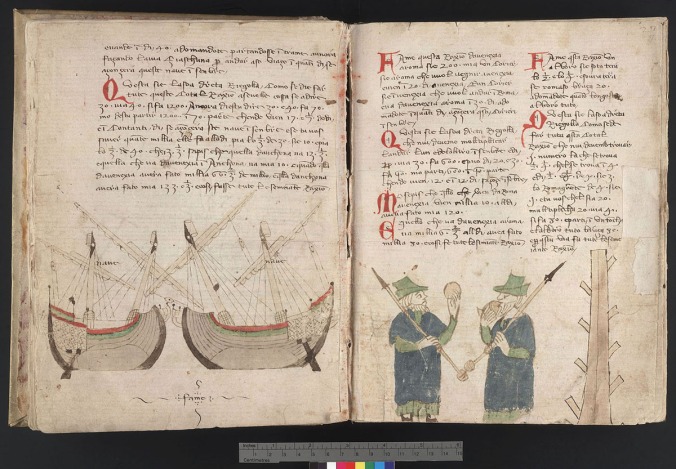 Page from a Commonplace Book, from “Belly of the Whale,” from the website Fierce and Nerdy: http://bit.ly/1t1OXa8

A Commonplace Journal (or book) is a place for ideas and pieces of stories, quotes, classes I want to develop, and maps. I love maps and making them helps me put things in perspective or just remember where I’ve been–both geographically and emotionally.

A visual journal is more of a sketchbook, with planned pages. You may start with randomly applying layers of color, then going back and creating a page. But a visual journal is planned, often with an image on every page or every spread.

Not so the Commonplace Journal. It’s a way to capture what you may need in the future, and because you don’t know what that is, each book is a compendium of what you come across in your life–quotes, book titles (those you like and those you make up in case you want to write one), song lyrics, overhead conversations.

I’ve written about 10 ideas to use in your commonplace journal, but here are some not-so-private pages from mine. Warning: it’s not gorgeous, not sketches, and not layered. It’s about memory and ideas and development.

At the beginning or end of some months, I put in a calendar page. It helps me see what happened in that month at a glance. Each date is not filled in, and some days take up a lot of space. It varies a lot.

Here’s one from March, several years ago: 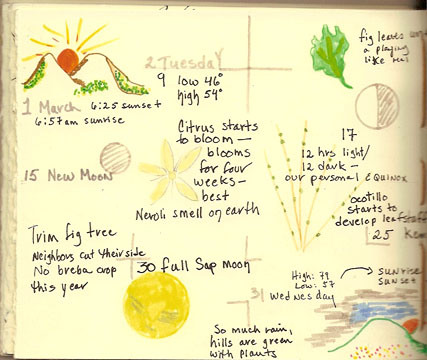 The first one generally mentions the sunrise and sunset times at the beginning of the month, because I am a naturalist, which means a lot of my journal is nature-based. Notice that there are just vague lines separating the days, and not every day is covered.

And here’s one from this past September: 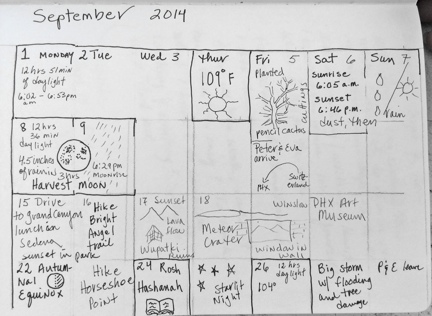 More complete and more defined lines. This is the page in progress. You can see that I penciled in all the lines for the dates, and then inked in those I used. This page isn’t finished yet. I need to erase the lines and maybe add more detail. I can do this because there are other pages in the book that remind me of what I did. Here’s an example: 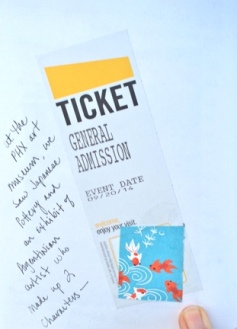 We went to the Phoenix Art Museum and saw an exhibition on Antonio Berni. I didn’t take my journal to the museum, so I just put a quick note of the two exhibits we saw–Japanese pottery and an Antonio Berni exhibit.

I happened to have a piece of Asian-inspired paper that a friend had sent, so that got put on that page along with the ticket.

Another page (not shown) is a detailed report about the Antonio Berni art. Berni is an Argentinian artist who invented two characters who populated his assemblages. Berni was deeply distressed by the social issues of his day–how industrialization changed the opportunities for people to grow and advance, how poverty affected the lives of families, and how politics governed cultural changes.

Berni invented two characters, Juanito Laguna and Ramona Montiel, and created entire stories about them using assemblage. The work was mesmerizing and I have several pages describing the sculptures, assemblages, found objects and colors he used as well as interesting words–he called shantytowns “misery towns.”

I received a huge surprise gift from far away on my birthday. It was handmade, 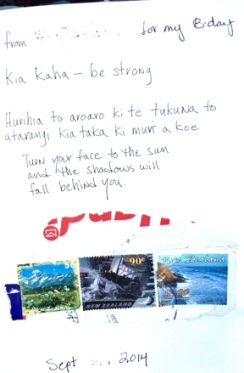 which always means so much to me. The person who sent them (who is not mentioned because I didn’t ask for permission) uses some great quotes, which I wrote on the page.

Even the stamps delighted me, so I included those. The back of the page details the gift and what I know about its production.

Ideas for art, classes and articles are all hidden in the pages, waiting to be distilled out.

Then there are maps. Maps are how we connect locations, but they also work for emotional journeys we take. 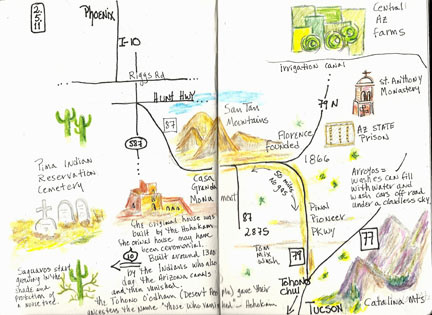 The first few times I went to Tucson from Phoenix (about 2 hours) everything along the way seemed new. That’s the best time to write down what I saw and thought. Sometimes I just jot down notes and put them in when I have a chance to sketch a map. The maps are not meant to be in scale, just remind me about what caught my interest. This map was detailed weeks after I did the first sketch.

The one above is about a trip I took to Las Cruces, New Mexico. 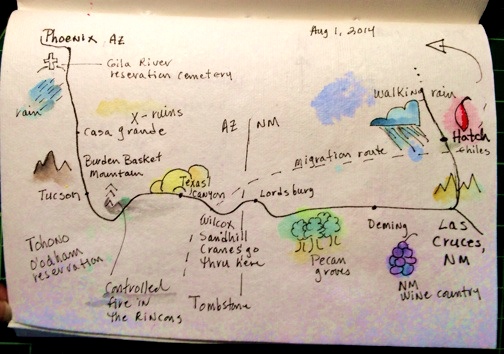 It’s a beautiful drive, and it has inspired several poems. The map helped me remember what I saw and when. This map was done quickly at a rest stop. It was all I needed and I didn’t add more detail.

This is a lot and it’s long, but I think that there is a place in today’s world for Commonplace Books, and I’d like to help people get back to using them and creating them. By hand. From the brain and through the heart.

—Quinn McDonald is a creativity coach and a naturalist who keeps a Commonplace Journal. 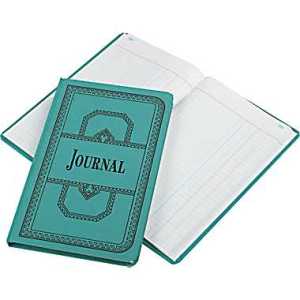 These lined ledger journals are available at Staples.

People who keep journals have a strong preference for using a journal with lines or one without lines. There are even journals with alternating lined and unlined pages.

For years, I’ve been a no-line journaler. No matter what the journal was for (and I keep more than one), it had to be unlined. I’m changing my mind. Maybe.

Here are the journals I keep:

1. Client notes, telephone numbers, deadlines, to-do list journal. Unlined. I use Moleskine soft-covers with vibrant cover colors. When they are full, I write the dates started and ended on the cover and keep them. They help me remember where I was and what I did when. Good for taxes and how long a past project took.

2. Sketch journal. Unlined watercolor paper. I use ink and watercolors to do sketches,  small collages and other design work. This unlined journal keeps me from having to fight perspective.

3. Capture journal. This is the one I just switched to a lined journal. I write down brain dumps, ideas, emotions, class ideas, problems with solutions, in this one. I write only on the right side for the first pass. Every now and then I go through the journal and “distill” it. I find insights or ideas and write them on the left page. Sometimes I highlight or add another thought on the left side as well. This distilled material winds up on the free-standing pages. 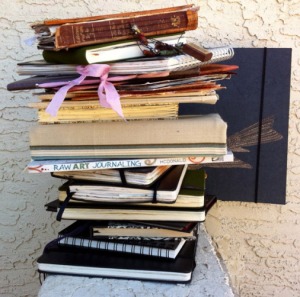 A selection of my journals.

4. Free-standing pages. These journal pages have art on one side and writing on the other. I’ve been making them for years and they are all the same size. They are the result of a combination of the  distill pages’ lessons and the artwork it inspires.

5. Commonplace Book. I didn’t know this type of book had a name till Kaisa from Vakloinenponi mentioned it. This is the book I use for quotes, well-written sentences, poems, titles and authors of books I want to remember, even articles I’ve cut out of a magazine. The history of Commonplace Books deserves a whole blog post on its own.

6. Nature journal. This is an unlined journal. I am finishing up a big, bulky book with rough pages. I keep notes on the weather, when  my fruit trees bloom or set fruit, or unusual events like this year’s killing freeze. I keep notes about trimming and fertilizing trees, birds I see, and general nature notes. I’d like to switch to a journal I can also sketch in. That’s the next one.

Using a lined journal helps the lines stay even, which helps me write faster and concentrate on the words and meaning-making instead of what the page looks like. The even lines also help me keep my handwriting the same size, which makes it easier to find a word or a specific idea when I hunt through the pages to distill the information.

It’s a new idea for me, but I’m warming to it. I will keep a mix of journals always, and it’s good to switch to a new size or type to see if it changes your journaling habits.

How many journals do you keep and do you prefer lines or no lines?

—Quinn McDonald may have to take a 12-step program to reduce the number of journals she keeps. If she does, she’ll probably keep notes in a journal. Oh, wait. . .