When Patti Digh mentioned the beet cake, my eyebrows went up , but my heart skipped a beat. Earthy beets, dark chocolate–yes, it could work. And having just finished Patti’s book Life is a Verb (I read What I Wish For You first)–either one make great gifts, but read them both–I would have tried boiled socks if she recommended it.

The availability of the cake recipe meshed nicely with a friend’s birthday, so I asked Cooking Man if he’d give it a try. He loves beets, so it wasn’t a hard sell. The recipe calls for a lot of beets, so a big pot went on the stove, and the smell of cooking beets leaked through the air-conditioned house. It was odd, smelling beets in summer. But we all suffer gladly for art and cooking experiments.

The batter was as red as could be expected from five-beet puree.

And now it was ready for the oven. The beets add the majority of the bulk in the cake, which reduces the sugar and flour.

Once out of the oven, it looked dense, smelled great, and the chocolate won the color battle. 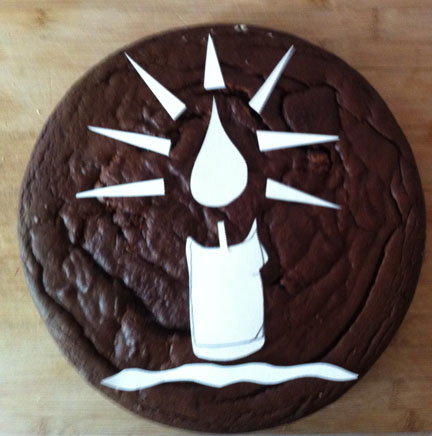 The fabulous beet stencil from the original recipe was beyond my pay grade, so I settled for a celebratory candle and my trademark wavy line.

I removed the stencil pieces with tweezers to keep from spilling any sugar in the negative space. There were a few tiny crumbs of sugar. I picked them off with a damp watercolor brush.

Nothing left to do but sing Happy Birthday and whip the cream. We like it flavored with a bit of vanilla, but unsweetened. The cake is flavorful, not overly sweet, rich in earthy-chocolate flavor. Cooking Man said he could get a hint of beet, but neither the Birthday Girl nor I could taste the beets. The texture is smooth, with a great mouth feel. Cooking Man thought that next time, it might be fun to split the cake and add a center layer of banana cream. I suggested a topping of creme anglaise, a vanilla-rich sauce.

Early in the beet-puree process, Cooking Man asked if I’d like to lick the blender–a treat for me with almost anything except beet puree. But wait! There is always room for art, so I took the leftovers and soaked different substrates in beet mash.

Top to bottom is a cotton/poly blend of fabric–it took on a bit of color, but almost all of it rinsed out. Next is a piece of canvas that took the color well. Below that is a strip of Arches Text Wove (now called Velin). The fabric and paper were dried, and then the beat mash rinsed off. Before all the color came off, I heat set the pieces by ironing them. Beet color is fugitive, and without a mordant to hold the color, it won’t last. Over time, it will fade, but I find the reddish brown an acceptable color.  The bottom strip is a very fragile paper that dissolved when I rinsed out the beets. To preserve this piece, I put the paper on a piece of parchment (still visible underneath all the papers) and sprayed it with a squirt bottle. It rinsed off some of the beet paste.

The next step will be to cover the paper in clear tar gel to preserve the color and paper.

Satisfying all the way around. Nothing is better than a cake and some new art papers, all in one afternoon.

–Quinn McDonald is the author of Raw Art Journaling, Making Meaning, Making Art, to be released on July 20, 2011, by North Light Books.