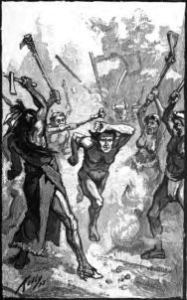 Bad experiences happen to everyone. Most of us learn to roll with them. But occasionally, we nurse a hurt into a grudge, and the grudge into a behavior that looks a lot like a pay-it-forward revenge.

Here’s what seems to happen:

Bad experience —–> anger —–> resolution to be fair when it’s your turn to lead —–> repeat the injustice when you get the power.

Instead of “I hated the short maternity leave when I was having my baby, I’m going to make it easier for the next generation,” I’m hearing “I didn’t have any leave, I don’t see why you should have it.”

It doesn’t sound like leadership, it sounds like revenge. Maternity leave is just an example. I’m seeing this vengeful behavior in mentoring, regulating job loads, hiring practices, loyalty, working in teams, even fidelity. Is this improving life and work?

I understand how it happens. Children with abusive parents often become abusive adults because it’s how they learned to handle power. It’s all they know.

Must we now see this effect in business? Employees with bad supervisors grow into bad supervisors themselves. Time to break the cycle.  It will take some work, some planning. You’re going to have to take your anger and change the outcome.

Retribution is like stabbing yourself a thousand times to punish the other person. You can start to change the world today. By being fair, even when you were not treated fairly.

—Quinn McDonald hears a lot about behavior at work. Not all of it is fair.

By the time the front-office employee hung up on me, I had been on hold for 22 minutes. More precisely, I’d been shuffled through menus for eight minutes and on hold for the other 14. The voice had said, four times at regular intervals, “If you want to make an appointment, leave your name and number and you will be phoned back within two business days.” But there was no opportunity to leave your name and number.

In a chain reaction, make sure you know where both ends of the chain are.

When the front office finally picked up, she told me that the doctor was not accepting new patients. I began to ask for another doctor in the same practice, and she hung up on me. Just like that. Lunch break was 30 minutes, and I had used 22 of them with no result to show for it.

This was a training issue. An overworked employee, overwhelmed by ringing phones, undone work, too much responsibility and no authority. Faced by a problem she couldn’t solve, she hung up on the problem. Bad training. Even worse customer service.

It’s a new insurance company to me, and luckily, they are publicly traded. Not exciting news, except I could easily find their annual report online.  Before lunch break was over, I had a phone number of a person senior enough to care about an unhappy client.

The phone call was brief. I left a message on his voice mail giving the date, time, of my disappointing call and the name of the person who hung up on me. I asked for a return call so we could take care of the training issue. And I asked for an apology.

In the end, that is exactly what I got. A heartfelt apology and a doctor’s appointment (with a different doctor). I posted a much briefer version on Facebook, emphasizing the training issue and the importance of customer service training for any employee who ever speaks with the public.

In a chain reaction, know what you are setting into motion. Know the end before you begin.

Instead of sympathy or other stories, a rash of comments told me to “speak truth to power” and name the company and the employee. I didn’t understand. The matter had been taken care of. There was no need to name a company or to hold an overworked woman up for derision.

It felt like relentless retribution–a senseless escalation of anger that would not be resolved or made better by “speaking truth to power.” I’d taken the steps that might solve the problem–spoken calmly to someone who had the power to create change, and received both an apology and the appointment I had wanted.

Sure, I had been angry. Seething. That’s an emotion that is strong. But every action after that emotion bloomed was my responsibility. Did I want this woman fired because she was overwhelmed? Had I not been overwhelmed myself? Did costing this woman her job equal my inconvenience?

Anger is a powerful fuel. It leaps along our brain, creating rationalizations. Demanding a job lost to justify our own importance. At that very moment, you have a chance to be fair. To give the fairness you were denied a new life in another circumstance. And it’s much harder to do than go for the throat

—Quinn McDonald knows that retribution isn’t worth it.