Note: Kaisa  Mäki-Petäjä is part of a blog hop I mentioned on last Monday.  She is a natural historian, and has posted the answers to the blog hop questions.Take a peek at her blog as the blog hop passes through Finland.

There are many ways to be an artist. Today’s selection includes unusual sculptor and two (very different) photographers.

John Lopez is a bronze sculptor; when his aunt died, he took a break to help his uncle find balance. John decided to build a cemetery near his uncle’s house in Western South Dakota. 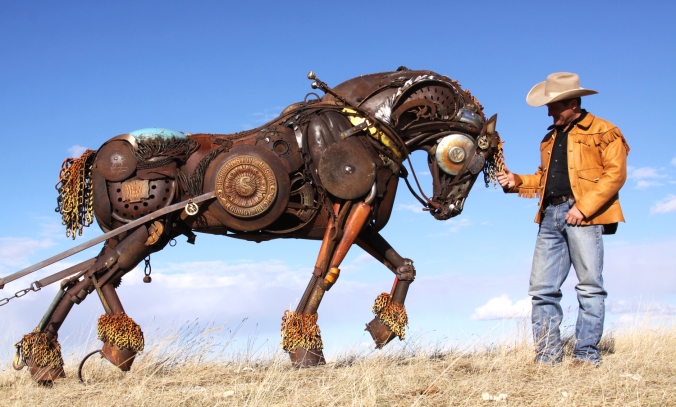 He started on the fence, and before he was through, he was out of supplies. His uncle was a welder, so John began looking through the scrap pile. By the time he finished the fence and gate, he had created a new art form: scrap-metal welding combined with custom bronze cast pieces. A whole new twist on mixed media. 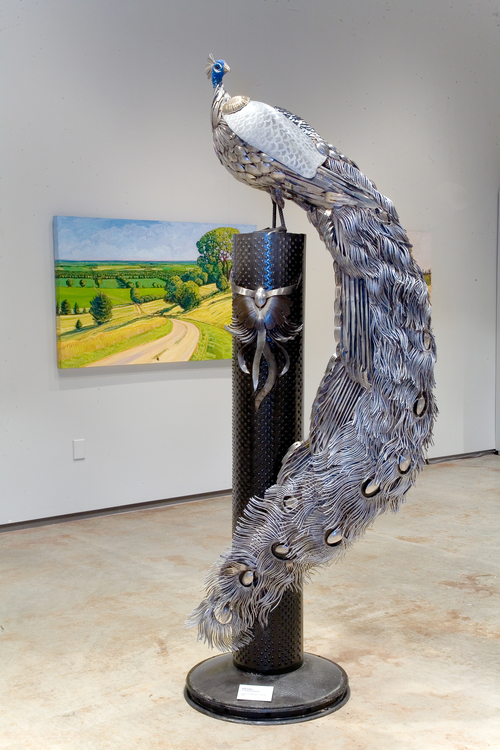 Sometimes the young artist is asked what he imagines his grandfather, the pioneer stockman, Albert Lopez, would have thought of his scrap-iron sculpture. Perhaps the best answer was given by another old-timer, who came to one of his exhibits. The old gentleman spent considerable time peering intently at a scrap metal saddle. After long study, he announced, “Now that’s art!” 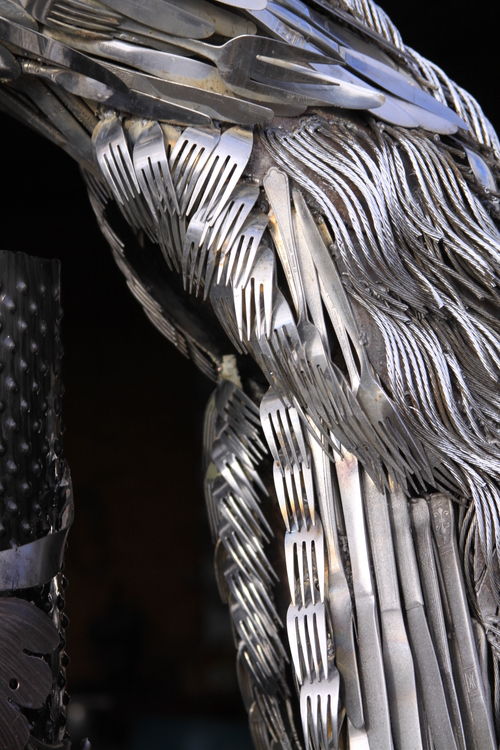 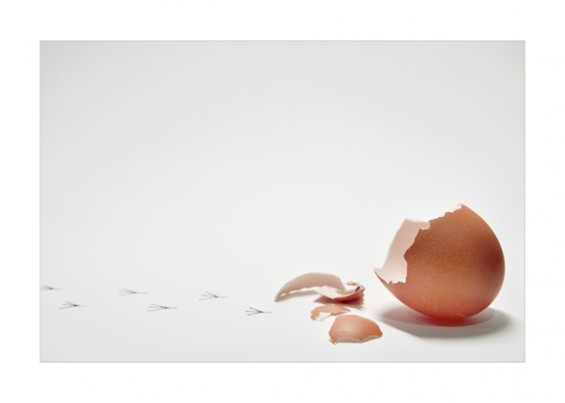 de Marina says, “They are very simple images. I try to create images that are easy to understand-and that hopefully don’t need any kind of explanations. I want to make an impact, give my viewers a little surprise. I hope that they will inquire more, and do further examinations.”

The juxtaposition of familiar objects into different context is both interesting and clever.

Steve Axford is an Australian artists who photographs the tiny–fungus. The delicate detail shows the beauty we miss when we wrinkle up our noses and classify all fungus as “eww.”

In his bio, Axford writes, “My photography has been my avenue into this world as it slows me down and allows me to look at things more closely.  Most of my photography is still pictures, as you will mostly see on this site.

“I try to combine the beauty I see with some scientific accuracy, so most of my photos could be used to identify things and will show the fine detail.  Recently I have started to take time lapse videos of mushrooms, and other things, growing.  This adds another dimension to an already fascination world and sometimes allows a glimpse into the world of interactions between different life forms.”

In the last section of Raw Art Journaling, I use photographs as a starting point. I find something in the photograph that wants out, and let it out with pencils, markers, paint. You can do the same thing with words. Look at the photos below and use them as the starting point for writing. A photographic journal prompt. In this case, I wrote haiku, although you can use it as a journal prompt for a nature journal as well. 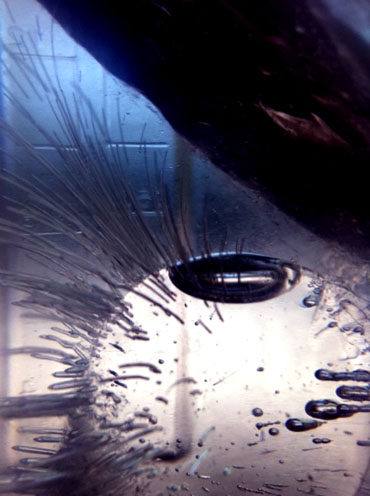 Earth waits for water
Water waits for freshing wind
Wind waits for no one. 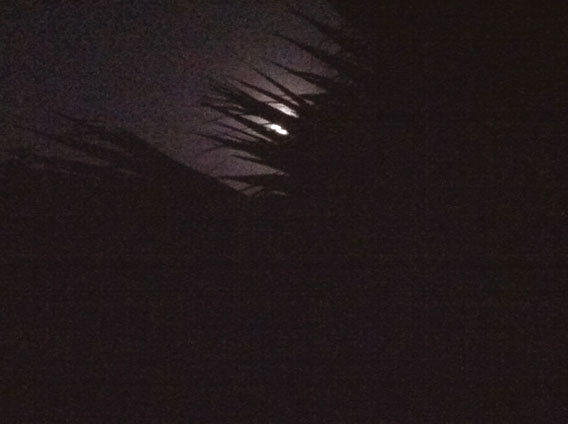 Dust hangs in the air
Reflecting heat and cactus
Glass is dust, is air

Get free shipping on Raw Art Journaling at www.shop.mixedmedia.com! Just use promo code RAWART2011 at checkout to get free shipping in the US.  Of course there is fine print, but not a lot. Here it is:

The Fine print:
*Code RAWART2011 is valid until December 31, 2011 at 11:59PM EST. Free shipping offer on US orders only. Price discounts are available for a limited time on some items. Please note that discounts are not available on products that ship directly from the manufacturer: see product pages for details.

–Quinn McDonald is the author of Raw Art Journaling.

Spring in other parts of the country brings steady rain and mud season. Here in Phoenix, we’ve had half of our predicted rain for this year already. So it was a surprise to wake up to the sound of rain. Ten minutes later it was over.

But it didn’t end there. The clouds gathered themselves us again. Below is a shot at dawn and a shot ten minutes later.

Spotlight on the palm. The palms that work best in Phoenix are Mexican fan palms. Queen palms just don’t work. We don’t have the humidity.

One palm gets a sunbeam

–Quinn McDonald is a writer and artist, but not a photographer. All these shots were taken with her iPhone.

Let the old year run off you like drops of rain. Let a small part of it hang on the edge of your consciousness for just one moment, so you can get the most of it, and then it drops, soaking into the ground of your experience. 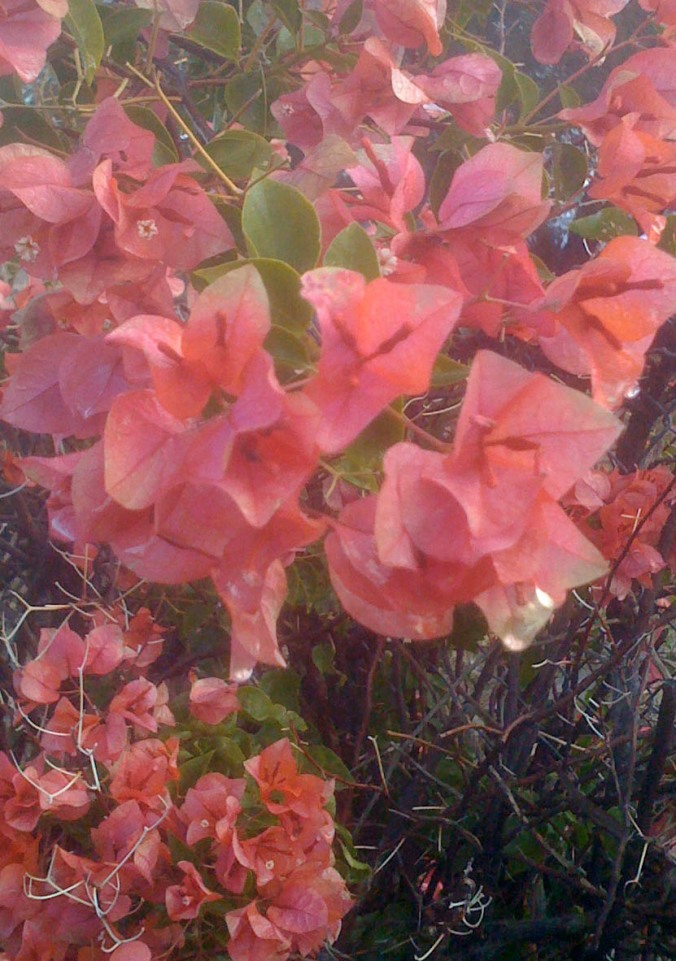 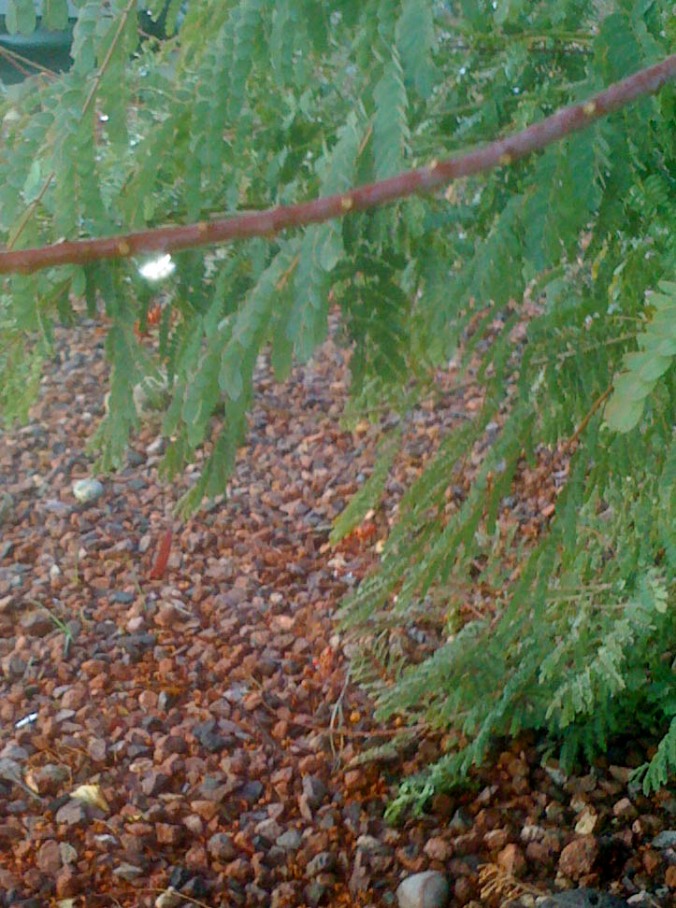 Water dripping from a tree branch

Water falling from a catsclaw

—Quinn McDonald is a writer and a certified creativity coach who helps people reinvent themsleves.

Here in the Sonoran desert, we don’t have a lot of pines covered in snow for the holidays. But we do have trees–even some pines. People hang ornaments in the trees outside, and they are lovely. In the early morning, they are covered in dew, waiting for the sun to dry them.

–Quinn McDonald is a life- and creativity coach who always has her iPhone with her. She turns it off when she is on morning meditation, but she does use the phone.  (c) 2008 All rights reserved.

Other people see the Virgin Mary in a grilled cheese sandwich or Jesus in a potato chip, or grow a rutabaga that looks like Lincoln.

Me, I walk by a tree every day that looks like Homer Simpson. And the eyes kind of follow you. . . 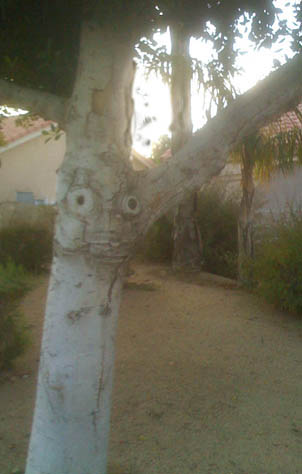 Homer Simpson's in a tree

–Quinn McDonald is a creativity coach who does walking meditation every morning. She helps other people explore possibilities in their lives.

“When you set a simple, clear goal for a year away, a lot of other goals get done along the way,” Bo Mackison says. Her goal seemed simple enough: post a photograph on her blog every day for a year.

And a year later, she can point to all those photographs on her blog–a task complete. But a lot happened along the way. The woman who didn’t know how to cut and paste in a Word document is now skimming through Aperture (photography software).

The same woman who picked up a camera again (this time a digital) when her last child left for college, is now working on a career as an assignment photographer.

The first pictures Bo posted on Flickr and her blog were snapshots of the world around her. But she had a good eye (those courses on art taken long ago helped), and discovered a huge community of interested photographers on the Web.

“I’d post a photo and someone would tell me how to make it better. Everyone was kind, no one made fun of my amateur work,” Bo says. “One person looked at all my photos on Flickr and helped me solve a sizing problem. Just because she wanted to be helpful.”

Bo bought books for inspiration, books to answer questions and learn techniques. She went out every day–which is saying a lot in Wisconsin’s winters–and took photographs, worked on them and posted them. Every day for a year.

Along the way, a former newspaper editor asked her to photograph and write for a blog about Wisconsin. The blog is now in the early stages of syndication. After a vacation Bo took through the Southwest, including Phoenix, a tour guide saw a photo taken at the Desert Botanical Garden and asked to publish it.

“Sometimes there is payment, sometimes you get paid in links,” Bo says, “But every time you take another step into learning, you find out more, and you grow.”

Bo hopes that her photographs and writing will lead to regular assignments.

“Photography is an experience. You don’t just walk into a box and learn what’s around you. The learning never ends. That’s what’s makes it so exciting. Who knows where I’ll be a year from now?”

I can’t wait to find ou

–Quinn McDonald is a life- and creativity coach who helps people face change and transition in their lives.

More than 5,000 years ago, the urge to tell a story that would be remembered drove human beings to invent writing. The first writing were not letters and words, but groups of symbols that told a story.

In the American Southwest, symbols are found on the sides of canyons or in caves. They are called petroglyphs. They were scrateched, etched with cactus juice, or chiseled into stone and give a message or tell a story. Because most of the cultures that used petroglyphs died out, reading them involves conjecture.

Petroglyph at entry to Taliesen West

Unlike hieroglyphics, petroglyphs are not words or sounds, they are symbols. The entire picture records an event, travel, migragraionor clan mark. Some are related to spiritual life and vision quests.

Some petroglyphs are easier to understand than others. Animal figures most likely symbolized a successful hunt or the location of a herd. Vision quests were symbolized with human and god figures, surrounded by dots, which may have indicated stars or the vision quest itself.

Abstract concepts were also used. A spiral represented a migration or spiritual journey.

Linked figures, like those seen on the left side of the picture on the left are not a spiral and may represent mutual responsibility or a treaty.

Both of these photographs were taken at Taliesen West, Frank Lloyd Wright’s summer camp and studio.

—Quinn McDonald is a writer, life- and creativity coach. She values everyone’s story and the secret meaning behind them. She teaches ideaglyphs, a journal writing technique that uses personal symbols and doesn’t require knowing how to draw.  (c) 2008 All rights reserved.

The Desert Botanical Garden in Phoenix springs a light show every winter, starting at the end of November. The garden lights 7,000 luminarias on every pathway and on the roof off the buildings. That alone would be breathtaking. This year, they added the glass art of Dale Chihuly, making the tour a nighttime must-see. 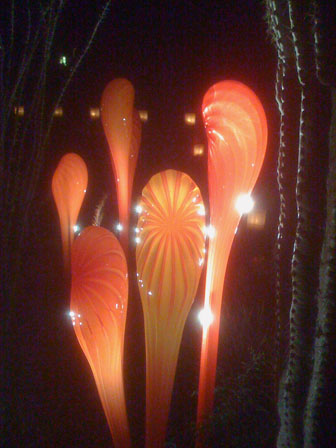 The organic glass sculptures look like otherworldly desert plants. Some are tall and sinuous, others looks like glowing rocks in a reed garden.

The tall, dark red reed-like structures create a cathedral. The cactus and desert trees around them look like Gothic arches. But when I moved just slightly, the same image changed to a smoke and fiery hell of red embers and incense smoke.

The paths wind through the darkened gardens lighting the trees from below and washing the paths in a soft, sandy glow. Music is stationed around the grounds, and you can drift from Native American flute music to folk guitar to big band. There 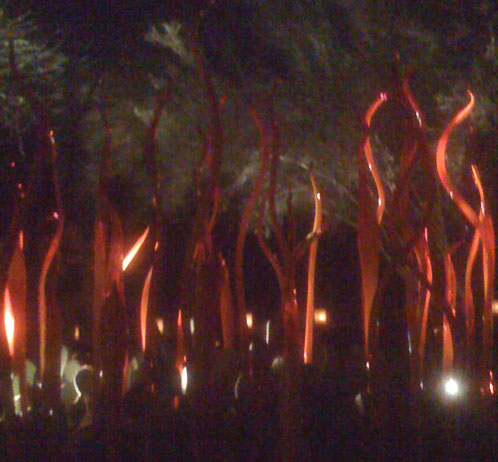 are also wine-tasting bars and coffee stations. You can walk and listen and be swept away by the plants, the lighting, the glass and the food. It is an amazing evening you shouldn’t miss.

—Quinn McDonald is a writer and certified creativity coach. 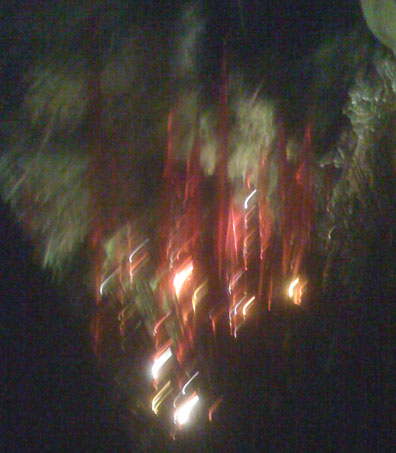 A few weeks ago, I saw what I thought was a cactus fruit and it turned out to be a green rubber ball. You can see the picture below. A few people wrote and said that it looked just like a rubber ball and they would have never been fooled. Fair enough. 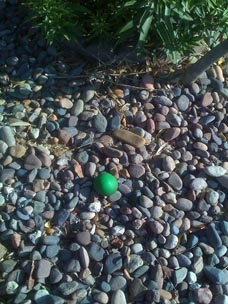 This morning, I saw this in a cactus and decided it was a red rubber ball. Wrong again! This time it IS a cactus fruit. I have no idea if it’s edible, it wasn’t mine to pick. But except for the color, they look a lot alike to me.

Here is a closer view.

Close up of cactus fruit

–Quinn McDonald is a writer and creativity coach. She runs workshops, seminars, and brown-bag lunches through her company, QuinnCreative.