It’s been hot early this year–while we generally hit 100 degrees for the first time in April, this year’s 106 and 107 in mid-May seems a bit early.

Frying an egg on the sidewalk–it works better in a pan. I’ve done it, and it does cook, but it doesn’t sizzle.

So how does one adjust to such high heat? If you live here, make the most of it. Toss your sweaty pillows out on the patio and let the sun bleach and freshen them. Don’t leave them outside for more than an hour, though, or they get dusty.

Have a desk chair mat? One of those plastic things that always turns up at the corners where it hits a desk or cabinet? Toss it out on the patio, and leave it for 15 minutes. The hard plastic softens and relaxes. Drag it to a shady spot before you bring it in. The heat makes it off-gas.

Dry your towels outside. OK, so they are a little stiff, but fabric softener makes towels resist absorbing water, and sun-dried towels smell great and dry you off better. It takes about 30 minutes for towels to dry completely. I once raced the dryer and with a light breeze before Monsoon Season starts (mid-June), the outdoor-dried towels win.

Still have plants in pots? You optimist, you. Starting now and going till September, water them twice a day, before dawn and after the sun is not longer directly on them. They’ll die otherwise, there just isn’t enough water-holding ability in potting soil. And if your plant pots are glazed and dark colors, they won’t make it past June 10. The roots cook if the pots are in the full sun.

While you are out early in the morning (after first light and before full dawn), change the food in the hummingbird feeders. Every day. At that heat, it sours in a day. The birds die quickly from consuming old hummingbird food, as it also grows mold.

Busy day? Core an apple, stuff it with bread drizzled with olive oil, a spoon of honey, a few raisins . Rub with flaxseed oil or olive oil, wrap in foil (shiny side in) and place in box in trunk of car when you leave for work. When you get home, you have a baked apple! (No cream or butter though. Hot car cooking requires some food-poisoning precautions.)

The Gladiator fire has decimated 10,000 acres of land that won’t come back for a generation.

Summers are tinder dry in the area, and brush fires easily get out of hand. The Gladiator fire has scorched 10,000 acres, and the land won’t be able to hold plants for 20 years. Unlike the East Coast, where a fire is good for the forest, our fires destroy landscapes. Please be careful with campfires and don’t play with fireworks, which are legal here. Legal and “good-idea” are two different issues. This fire was started by an unsupervised child.

–Quinn McDonald loves Phoenix any time of year, but not when it’s a dry hate. There is much healing to be done anyplace in the world, but she was called here.

If you live in a hot climate, you begin to wonder if, indeed, it is hot enough to fry an egg on the sidewalk. This week, despite the fact that autumn is on the way in most of the country, we were treated to a series of days over 100 degrees. About 109 degrees, in fact.

As a newcomer to the desert, I began to think about the egg and the sidewalk. Not wanting to smear butter on the sidewalk, I chose a plate instead and decided to see what would happen. Turns out it was not a “yes” or “no” question. I hadn’t given it much thought past seeing if the egg cooked. What I didn’t consider is that a slow-cooked egg might look a lot different than one fried in a pan.

I started by spraying a small plate with oil, so the egg would not stick and

make a mess. I then cracked an egg onto the plate, sat it on my patio, in direct sun at about noon on a day the temperature reached 109 at 4 p.m. That’s the time of day the air temperature is hottest; I chose noon because the sun was directly overhead.

First the edges of the egg began to crinkle and dry out. That was my biggest surprise. Clearly, the egg wasn’t going to cook like it would on a burner. But I saw the cooking process slowed down–first the edges dried and began to flake.

In the next step, the egg began to expand, as most things do when they get hot. Because the outer membrane of the egg had already “cooked” by drying and shrinking, the yolk broke. Nothing poked it, it simply broke because the expansion was more powerful than the shrinking and drying outer membrane. 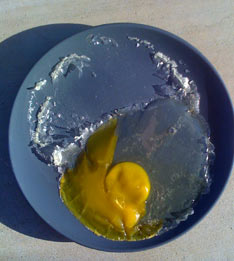 The third step was that the egg slowly began to dry and cook. After two hours I stopped the experiment because some adventurous ants had discovered it, and that is a separate adventure I didn’t want to experience. However, the egg is clearly “cooked” in that it is congealed into a solid mass. Not exactly ready for hash browns and bacon, but that wasn’t the point.

So the answer seems to be, yes you can cook an egg on a plate in the summer. You may not want to eat it, but given enough time in our summer heat, you can get both white and yolk to congeal and harden. Had I stored it in my car, parked in the sun, I’m sure I could have had faster results.

The temperature in the car was over 170 degrees, which explains how come we put towels over our steering wheels and those funny accordion-pleated shades in the windshield.

–Quinn McDonald is a writer and curious about the world around her. Sometimes the edges of the world end at an egg on a plate, sometimes the horizon is a bit farther away. See her work at QuinnCreative.com